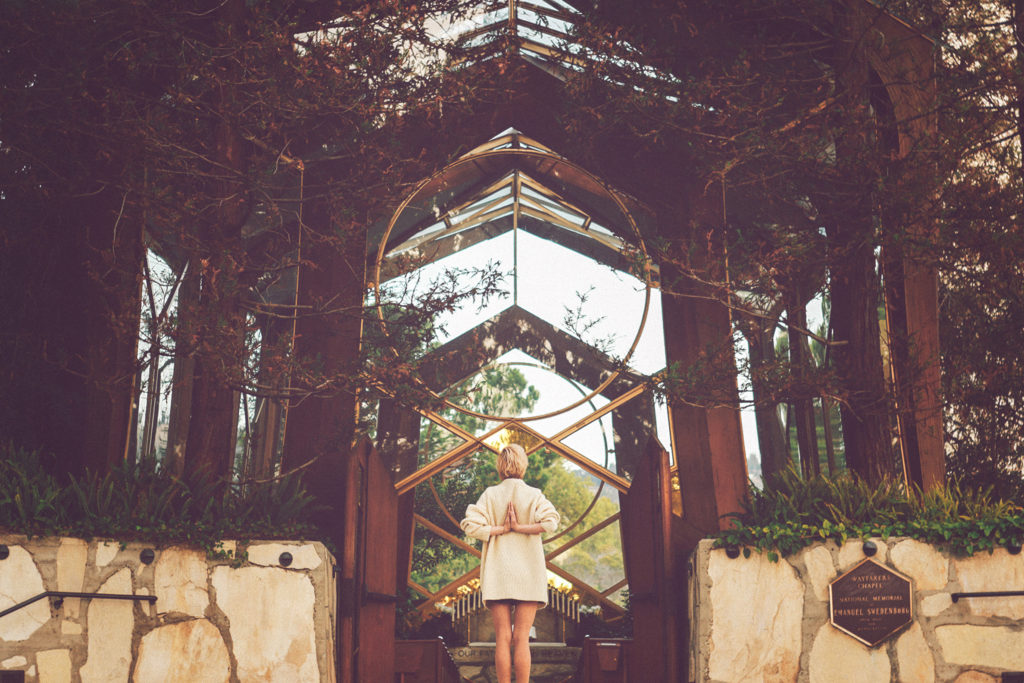 As a Christian of 20 years, a yogi for 7, and fitness instructor for 2, I’m hosting a Christ-Focused Yoga session because I want to share the powerful experience of using yoga for prayer, worship and praise of the Creator.  But, I know there are a lot of questions about yoga and spirituality, so I thought I’d share why, theologically, and how I personally and practically integrate the two.

First off, there are many different types and styles of yoga.  Even within the same style of yoga, an experience with that style will vary with the instructor and class venue–by music, postures, sequences, intensity, breathing, level of spirituality, etc.  I mostly practice power yoga/vinyasa yoga, so that’s what I’ll be referencing.  It’s a more athletic, more westernized, faster-paced practice in which each movement is choreographed to an inhale or exhale.

Second of all, if your Christian faith is budding, proceed with caution.  I would stay away from experimenting with mixing yoga and spirituality if you are new or ungrounded in your Christian faith.  Telltale signs of a firm faith are: tithing, being part of a community group, regular church attendance, serving the community, and regular quiet times.  These five practices will help keep you firm and accountable in your faith, protect you from deception.  With that said….

Being a good steward of the temple God gave me

If nothing else but out of respect for the Creator that gave it to me, I have a responsibility to be a good steward of the physical body I’ve been given.  I seek to maintain the strength and flexibility of my temple in hopes that I’m able to fulfill my God-given purposes with more energy and stamina and for a longer time.  Yoga is a doctor-recommended way for me to take care of my non-refundable body; and thanks to yoga I’m physically able to do things at 31 that I wasn’t able to do in my twenties.  In the same way that being a good steward of my time and money helps me serve God with more freedom, so does being a good steward of my body.

The eastern origins of yoga are no more dangerous than that of karate.  Just because we learn something that isn’t straight out of the Bible, doesn’t mean it doesn’t have value.  We learn everyday from both western and eastern, non-Biblical sources such as movies, books, speakers, that teach us truths about science, business, relationships, and more.  If what we learn is actually true, it will not conflict with the Bible.  For examples, gravity, loving a pet, algebra, business strategy, and counseling are not enumerated in the Bible, but experience shows us the benefits of these practices.  It’s the same for yoga.  While the yoga yamas and niyamas will never transcend the Bible, they do not conflict with it.

Again, there are lots of different styles of yoga, some are more or less spiritual than others, and not always in buddhist or hindu tradition.  Successful yoga chains like Core Power have reached thousands of people because they purposely keep spirituality light.  Instructors such as Ana Forrest incorporate Native American practices with yoga.  And, I’m not the only Christian yoga instructor who incorporates her faith with her physical practice.  Unlike Christianity, yoga is what you make of it.  Though I’ve attended a few classes that are more spiritual, I practice the more physically-focused versions of yoga.

Thirdly, most yoga postures are so natural and beneficial to the body, that most Americans have probably done them or at least seen them and may not have known they were yoga.  For example, to reach your fingertips towards your toeis common sense for relieving lower back or hamstrings tightness. We’ve probably all done it in gym class or before/after a workout.  But, there are some who would argue that as soon as that stretch is called “yoga”, “uttanasana,” or a “forward fold,” it becomes spiritually dangerous for Christians.  This seems silly to me.  As another example,  the staple chaturanga dandasana (high to low plank) followed by mountain pose is essentially just a slow variation of the foundational crossfit move, burpee.  If you ask me, burpees are not evil–but rather beneficial and God glorifying–whether you do them fast or slow.  For a final example, lunges are basic moves in fitness.  In yoga, reaching your arms over your head in a lunge is called Crescent lunge. It’s difficult for me to believe that just because we call it Crescent lunge or “Anjaneyasana” it’s taboo.   Whether you call your warrior 2 stance, “warrior 2,” “Virabhadrasana” or–as kids yoga students say, “surfer”, it is what you make of it.

The meaning of yoga

The word yoga means “union” in Sanskrit.  Some insist that this must refer to the union between one’s self and one’s higher self per Buddhist and Hindu tradition, but the more common understanding is that yoga creates union in many different ways.  For some examples:

How I incorporate my faith with my yoga, practically speaking…

In my personal prayer time

Western science attests to emotional stress’ effect on our body and yoga’s ability to relieve it.  Practicing yoga during my prayer time helps me to surrender my burdens that much more easily.  It’s as if I can physically feel the burdens being lifted.  Sitting with my Bible and journal during my quiet times without busting out a yoga move feels weird to me now! It’s natural to me to pray in a seated forward fold.

Kneeling and dancing before the Lord and raising hands in worship are Biblical principles.  In yoga class, when I raise my hands over my head in crescent lunge or mountain pose, I’m raising my hands in worship and surrender to Jesus.  When I kneel in childs pose with my palms open, I’m kneeling to my Maker.  When I’m transitioning from one pose to another like a dance, I’m moving with Christ-focused intention.  Afterall, dance and other physical practices are well-accepted by the church as ways to worship and glorify Christ.

Often yoga instructors will prompt their students to set an intention for class.  I frequently devote my yoga practice to a prayer, whether it’s for someone else or a prayer of personal surrender.  When the instructor offers wisdom about life or spirituality, I test it against my faith, and if it makes the cut, I take the wisdom.  If it conflicts with my faith, I ignore it and move on. I wouldn’t substitute my personal prayer time for a group yoga session, but praying during yoga in addition to my other spiritual practices is a refreshing practice for me.

I’m hosting the Christ-focused yoga session on Saturday September 3rd to share that experience with others.  The class is set to all Christian music.  The songs, cues, and postures have a Biblical  theme such as surrender, family, or peace.  It will be such a cool experience to worship Christ collectively with our minds and bodies in the gorgeous outdoors!

To learn more about me and the Christ-Focused Yoga Event on September 3rd @ 10AM!  Visit FreedomYogaSD.com.