Women nominated by their peers or applying themselves will exemplify the ideals of The Better Business Babe core values to aspire to a well rounded balance between Business & Life!

Do you have an inspirational women in your life that you think would be worthy of nominating? Or do you have a story that you feel would be valuable to inspire and benefit others? This is the perfect opportunity to share your story~ Apply now to nominate yourself or someone you know! 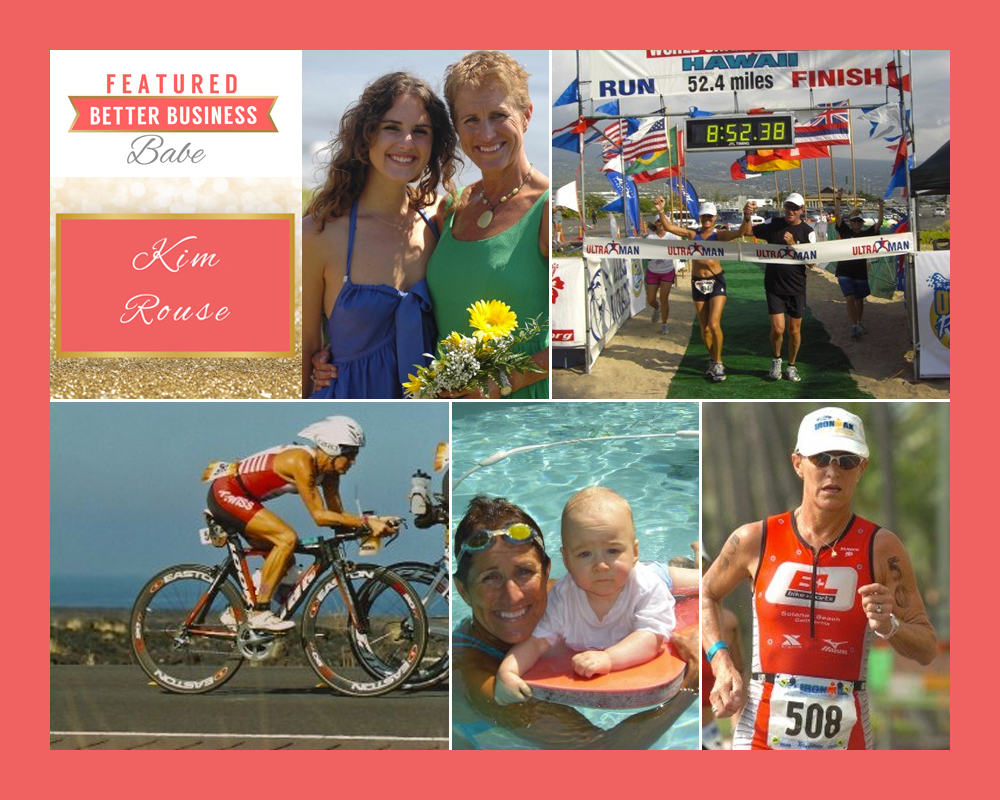 Kim was nominated by one of our very lovely contributors Amy who is a long time friend of Kim’s and interviewed her for this write up!

Kim Rouse is one incredible woman.

I’ve known her for several years and though we’ve spent many hours together, she still surprises me with her insanely impressive list of talents, and her calming, invigorating presence.  She is a woman of inspiration. I sat down with her one day, in the remodeled kitchen of her relaxed San Diego home to hear her life story in a nutshell.

Kim was a successful musician for many years. She has a degree in music from San Diego State, (voice major), she sings, plays the piano and guitar, and had dreams of becoming a music teacher in public schools.  After PROP 13 was sadly passed (effectively eliminating funding of music programs from the public school system), that dream was no longer possible unless she left California. She played music for money wherever she could, weddings/events/parties, playing in bands, but she needed a paying job fast. She reluctantly began a career as a real estate agent, following in her mother’s footsteps. Luckily for Kim, the job suited her personality and it soon became her new passion.

She’s always been athletic. Downhill skiing was her favorite sport, and she began jogging in college to stay in shape with a very hectic schedule. She also loved tennis, but it took up too much of time. After running 3 miles for a long time, she just kept increasing her distance when it became “so comfortable I didn’t want to stop.”

Kim and her husband lived on their sailboat in San Diego. She was a coast guard captain and they ran a successful sailing cruise business, giving happy folks two-hour wine tasting tours around the bay (how awesome does that sound?). Her daughter Cara was born in 1984, so they sold the boat and bought a house.

Reflecting back, Kim vividly remembers a pivotal life changing moment: Joan Benoit Samuelson won gold at the 1984 Summer Olympics in Los Angeles, the year that the women’s marathon was introduced. (Samuelson was the first-ever women’s Olympic marathon champion and still holds the fastest times for an American woman at the Chicago Marathon and the Olympic Marathon. Her time at the Boston Marathon was the fastest time by an American woman at that race for 28 years. Yeah, Samuelson’s like, kind-of a badass). In that very instant, Kim wanted to run the marathon. “She started running longer, entered the San Diego Marathon and qualified for the Boston Marathon. In Boston she ran a 3:02 and knew she wanted to try for the 2nd Olympic Trials Marathon. She found a coach and got serious.

During this time, she was running and working hard. Her husband lost his business and she was the sole income earner for a few months. She raced her way to a 1988 Olympic Trials slot and continued to be a big supporter and contributor of the San Diego running scene. In 1986 after some pushing and convincing by her best friend, a long time senior flight attendant, Kim joined the ranks of Southwest Airlines (‘stewardess’ back in those days, remember?).  At first, it was exciting, earning extra income to supplement her realty profession…then it quickly turned exhausting. All the traveling was taxing, she wasn’t around a lot and her husband had to fill in the role of both parents…Despite her career success, her marriage took a turn for the worse.  After 19 years, they divorced.

Kim was still a national level runner, racing in the women’s 40’s age division masters circuit, competing in races across the country and getting up at 5am every day before work/flights to get a run in. She never quit it. She was a mom, working two full time jobs and running 60 to 90 miles per week (no, that’s not a typo. I’m stoked if I run like, 5 in two weeks.) She took in a roommate for extra income, and her parents helped out taking care of Cara.

There were times it was too much. She wanted to quit flying, but her best friend wouldn’t let her (she had to stick it out after going through the tough years). “I knew that I couldn’t fit the training into motherhood and 2 full time jobs.” Instead of quitting, she gave away her trips and did real estate only. It allowed her to train and follow her passion “you gotta follow your passion, man, otherwise, why continue?” she tells me.

In 1996, she met her now husband & love of her life, Mike (known as ‘Pops’ by his friends) an ultra-distance runner and fellow badass. While on vacation in Kona, Hawaii, he decided to train for an Ironman. Inspired by him—and hurting from the mileage after suffering multiple stress-fractures, running had taken its toll on her body—she took up training with him, with no real intention of becoming a triathlete. Low and behold, another passion was born.

Taking off only two days a month (a MONTH. Just in case you didn’t catch it the first time), Kim added swimming and cycling to her list. Her modest nature downplays her skills: Kim’s athletic ability is off the charts crazy impressive. She’s a machine, a beast. (In spirit only, she’s probably only 120lbs and, even then, only after a thanksgiving feast).

And Kim’s had her fair share of tribulations. She’s crashed on the bike a few times, breaking her clavicle, and her hip. She had to have her hip re-broken with two surgeries and went from being an elite competitor to being practically cripple, needing a walker to get around. One of her close friends was KIA in Afghanistan–he was like a son to her. Last year, she lost her father, her biggest supporter and inspiration. Kim’s had her share of dark days, but she has never given up.

Kim Rouse is a 2007 World 70.3 Champion and 2nd through 5th in the IRONMAN WORLD CHAMPIONSHIP KONA. (If you have no idea what that means, Google it right now.) It is the toughest Ironman race in the world, and she’s been a podium finisher SIX TIMES. She’s also age group world record holder (50-59) in THE ULTRAMAN WORLD CHAMPIONSHIP, competing 3 years in a row.

At 59 years old, Kim has the body fat % of a 25 year old. She effortlessly radiates light, and at the same time, can throw down some beers and hang with whiskey drinkin’ men. She still flies with Southwest Airlines, she’s been a realtor for 35 years, a fabulous loving mother to her beautiful Cara, a devoted wife and devoted daughter (she cares for her 90 year old mother), and, best of all, a truly great friend. Her door is always open when her friends need her, despite her hectic schedule. Kim’s work ethic and her never quit mentality is legendary. She is one bodacious babe.

KIM’s 3 ACTION STEPS (in her own words)